A key rationale for the NSW Government’s biodiversity reform package seems to be that our current vegetation laws are not working. We disagree with this rationale.

This is the first of six key issues we’ve identified in the reform package. View all six issues here.

To understand why we disagree with the Government's rationale, we need first to understand the key law relating to vegetation and land clearing, the Native Vegetation Act 2003.

The current regime
The current Native Vegetation Act was introduced to address systemic failures in managing land clearing. Its predecessors – a state environmental planning policy introduced overnight in 1995 (SEPP 46), followed by the Native Vegetation Conservation Act 1997 – both failed to prevent inappropriate clearing by allowing broad and cumulative exemptions, and poor enforcement. This failure was recognised by the Audit Office of NSW.

The Native Vegetation Act was developed in close consultation with farmers and conservationists in response to failures of previous regulatory regime to prevent inappropriate land clearing.

A key foundation of the current Act is to ‘ban broadscale clearing unless it maintains or improves environmental outcomes.’ The Act is also underpinned by a scientific Environmental Outcomes Assessment Methodology (EOAM) that ensures not just biodiversity, but soil, salinity and water impacts of clearing are scientifically assessed.

The introduction of the Act was also accompanied by a significant investment for private land conservation through property vegetation plans (PVPs). A $430 million package was made available to catchment management authorities (CMAs) to assist farmers in repairing the landscape. A minimum of $120 million was earmarked to help farmers maintain or improve native vegetation for biodiversity, water quality, soil and salinity outcomes for four years following the introduction of the Act.

The public register shows that between 2005 and 2015, over 1,000 PVPs were put in place across NSW. The Act allows farmers to do whatever they like with regrowth vegetation and to undertake routine farming activities without approval. But importantly, it does sometimes ban inappropriate clearing.

Since the Act came into force, land clearing has reduced from up to 21,500 ha per year to 11,000 ha per year. Commentators have recently estimated the Act has directly led to conservation or rehabilitation of 250,000 ha of land.[1]

The current system worked well – until, that is, funding cuts to CMAs after the initial four-year investment caused delays in land clearing approvals and making property vegetation plans.

But this doesn’t mean the current laws are not working,  merely that the system has not been resourced to work effectively.

A new Land Use Map will determine whether land clearing rules apply. The Map will categorise land as: 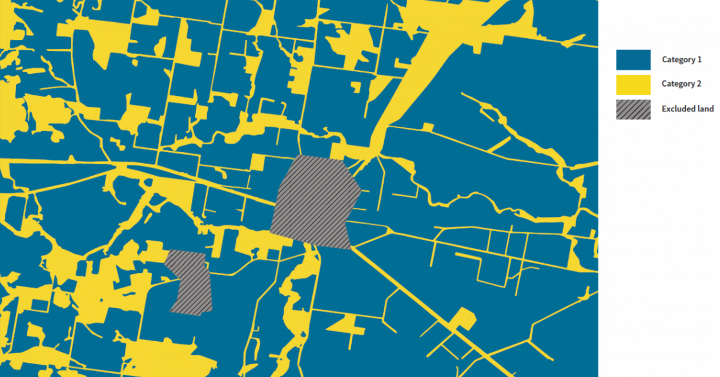 We explore implications for urban biodiversity under issue 4 in this series. For land likely to be categorised as blue (exempt), we’re currently analysing whether the mapping process would create an ‘amnesty’, by allowing previously illegally cleared areas that weren’t prosecuted to become blue unregulated areas.

We have concerns about land categorised as regulated (the yellow category). In the draft reforms, there are no clear environmental baselines, aims or targets for land in this category. There is no ban on broadscale clearing, no mandatory soil, water and salinity assessment, and no ‘maintain-or-improve’ standard to ensure environmental outcomes – either at the site scale or at the landscape scale. Significant clearing can be done on these areas under the proposed codes.

The proposed regime therefore significantly loosens the environmental checks and balances that exist in the current system: it is less stringent, less evidence-based, less accountable. The new system is therefore likely to result in significant clearing increases in NSW.

The effect of the reforms: increased land clearing
The NSW Government has been unable to estimate how much land clearing will occur under the new, more relaxed system, and in particular under the new self-assessable codes. The proposed legislation includes updated offences and penalties, but there is no indication who will undertake compliance and enforcement responsibilities.

We believe the proposed reforms are likely to lead to a significant increase in land clearing, and consequently a reduction in native vegetation and biodiversity in NSW. No one can perfectly predict the future, but Queensland provides clear evidence of what can happen when clearing laws are relaxed. It has been estimated that there was a huge pulse of 275,000ha of land clearing after Queensland’s land clearing laws were relaxed in 2013-14.[2]

There is nothing in the proposed NSW reform package to prevent similar clearing occurring here. Farmers may set aside areas for conservation or revegetation, or access an expanded offsets market, but the bottom line is that there will be increased clearing at the site scale.

Next in this series: Offsets and ecologically sustainable development

The NSW Government has released a draft law and policy package that represents a serious retrograde step for biodiversity, as it involves removing many of NSW’s long-held environmental protections.

Public submissions on the reforms close on Tuesday 28 June 2016. Find out how to get involved via the links below.

If you would like to help us to continue helping the community to protect the environment through law, you can donate online, become a friend of the EDO, check out our current appeal, or read more about how you can support our work.

[1] Data from Perry, 2016, The NSW government is choosing to undermine native vegetation and biodiversity, The Conversation, and Environment Protection Authority, 2015, State of the Environment Report 2015