We’ve just released our 2015/16 Annual Report, so I have been in a retrospective mood, looking back at all we achieved between July 2015 and June 2016. And what a twelve months it was.

It has been another brilliant year of public interest environmental lawyering.

We started the year with our controversial win in the Federal Court of Australia for the Mackay Conservation Group against the approval for Adani’s Carmichael coal mine in the Galilee Basin. Our client commenced proceedings to call out a clear error of law in the mine’s approval. The Minister recognised his error and conceded the case.

This was an example of public interest environmental litigation working well to reinforce our country’s laws. At its heart, the case was about upholding the integrity of our national environmental laws which are designed to protect the environment, and holding to account those who administer the laws.

Shortly after this success, however, we faced accusations from some in the media and the Federal Government that our case was a form of ‘lawfare’, or ‘vigilante litigation’. These accusations were bizarre in light of the reality of the case – the Minister had made an error of law, and admitted as much during the legal proceedings. But the Government went further, proposing changes to national environmental laws to limit the already limited rights of the community to protect the environment through court action.

As I write, those laws haven’t passed, but they remain on the books. In fact there is a recently renewed discussion by some continuing the attack on the right of the community to access environmental justoce. This is a reminder of how vulnerable our environmental protections can be.

It is important to reiterate that EDO NSW has rigorous guidelines about when we take court actions on public interest litigation matters. Those guidelines have been developed over many years, and work to improve the functioning of public interest environmental law in New South Wales and Australia.

Our legal advice work increased on the previous year, and we were successful
in most of our court cases in 2015/16

Our success with our client Friends of Tumblebee in our Regent Honeyeater case also resonated far and wide. Central to this case was the survival of the Regent Honeyeater, a bird in grave peril, perched on the brink of extinction. Extinction is such a serious matter. The finality and irreversibility of extinction is an uncompromising reality that the law has to grapple with.

The finality of extinction was brought home this year when the NSW Government proposed significant changes to our biodiversity and native vegetation laws. Those changes have now just passed through Parliament and will soon be our law. The native vegetation laws they will superceede ended decades of harmful broad-scale land clearing – the laws banned clearing that could not be shown to at least maintain environmental outcomes. Those laws were introduced on the basis of evidence showing how harmful broad-scale land clearing was – environmentally, socially and economically.

Our analysis of the incoming laws is that they are likely to be a serious retrograde step for environmental laws in NSW and will facilitate an increase in land clearing across the landscape.

Our community reach and engagement grew strongly in 2015/16

The stakes are high, with biodiversity loss continuing to increase, the natural environment and our natural resources facing increasing pressures to sustain and grow our material wealth, and the climate changing. At our gala dinner we were so fortunate to have the company of Professor Tim Flannery.

Tim spoke authoritatively of the scientific importance of biological diversity and protecting species from extinction, but he also spoke about the moral obligation to avoid extinction. What right do we have as one species to be responsible for the extinction of another?

People are the heart of EDO NSW: our outstanding, deeply committed, staff; our supporters and donors who keep the wheels turning and advocate for us; our pro bono lawyers and scientists who so generously provide us their expertise; and our Board members, who believe in the organisation and give much of their life to be an essential part of it.

We are all part of a special community, a hub of dedicated, optimistic people working together to protect places and values that Australians hold dear. I feel privileged to be part of this amazing community.

I invite you to read our 2015/16 Annual Report, and hope you find it informative and inspiring. If you aren’t already, we’d welcome you as part of our growing community of supporters. Click here to find out how you can get involved.

There has never been a more important time to be engaged in environmental law. 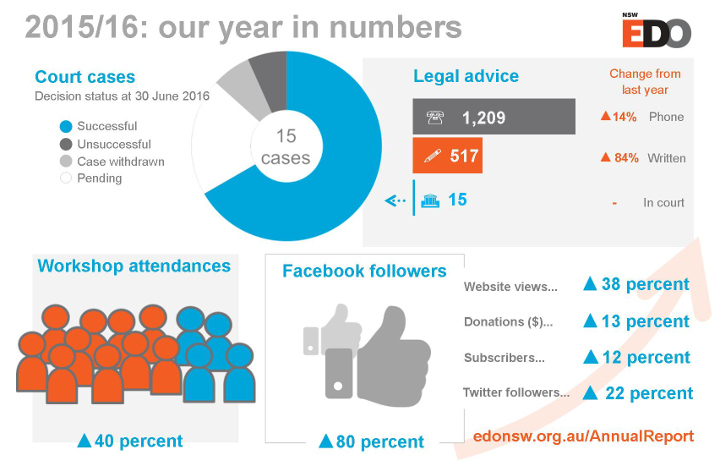