A meeting of the Independent Planning Commission (IPC) on the proposed greenfield Bylong coal mine heard from expert witnesses on behalf of EDO NSW client, the Bylong Valley Protection Alliance (BVPA). 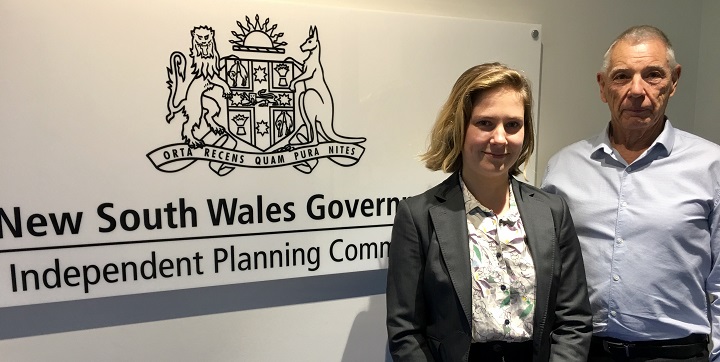 Monday 12 November 2018: Tim Buckley, energy economics specialist, Doug Anderson, hydrologist and expert on groundwater and mines, and Will Steffen, climate scientist, were among those who addressed the Sydney meeting. Counsel Jeremy Farrell was also present, along with Warwick Pearse of the BVPA and EDO NSW solicitor Nadja Zimmerman.

Warwick Pearse had spoken, along with BVPA member Bev Smiles, at a public hearing in Mudgee last Wednesday.

The pre-IPC Planning Assessment Commission (PAC) conducted a Review with a public hearing in relation to the Bylong Coal Project in 2017, which found substantial doubts persisted about the risks and benefits of the proposal for a thermal coal mine development 55km from Mudgee.

The mine would have a proposed life of 25 years. For the first seven years of operation there would be two open-cut mining areas, at which point longwall underground mining would be introduced.

The PAC Review raised concerns about potential impacts on water and agricultural resources, social impacts on Bylong Village and its surrounds and impacts on the heritage value of Tarwyn Park as well as the broader state significant heritage values of the magnificent Bylong Valley.

The PAC sent the project back to the Department of Planning and Environment. In response, the applicant, KEPCO Bylong Australia Pty Ltd, lodged revised plans with the Department in July 2018.

After completing its assessment of the proposal the Department referred it to the Independent Planning Commission for a decision.

Because the former PAC has already held a public hearing in relation to this project, merit appeal rights in relation to any future determination by the IPC have been extinguished.