At our March 2019 EDO Insider on the Rocky Hill litigation, Scientific Director Megan Kessler gave an overview of the expert evidence given in the Land and Environment Court during the Rocky Hill hearing in August 2018. This was the first time climate change has been addressed in an Australian court using the concept of a carbon budget. In refusing approval for a new coal mine at Gloucester, the judgment relied on evidence from expert witnesses, Professor Will Steffen and Tim Buckley, who had been engaged by our client Groundswell Gloucester.

In this legal update, Megan outlines the expert evidence that informed Chief Justice Preston’s consideration of climate change in the Rocky Hill case and asks what’s next for the carbon budget.

One of Groundswell Gloucester’s (GG’s) key arguments in Court was that the Rocky Hill Coal Project (the project) was not in the public interest or consistent with the principles of Ecologically Sustainable Development (ESD), because of its contribution to climate change and the associated environmental impacts that will arise from a changing climate.

From a scientific perspective, this contention has three key elements:

The evidence of Professor Will Steffen 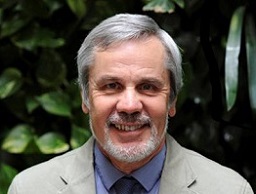 Professor Steffen (right) discussed the fact that anthropogenic climate change is real and the current impacts of global warming (at 1ºC above pre-industrial levels) are already being seen in NSW and across the globe. He relied on research from the Intergovernmental Panel on Climate Change (IPCC), Australian Bureau of Meteorology and CSIRO to describe projections for future climate change impacts, both locally and globally. He also explained that it was in recognition of these projected impacts that, in Paris in 2015, Australia and other nations agreed to:

In Professor Steffen’s view the carbon budget approach is the most robust way to determine the rate of emissions reductions required to meet the goals of the Paris Agreement.

The carbon budget relies on the well-proven relationship between the increase in anthropogenic greenhouse gases (GHG) emissions and the increase in global average surface temperature.

So what does the carbon budget tell us about the emissions reductions that are needed to meet the Paris targets?

Professor Steffen told the Court that the carbon budget could be used to determine the emissions reductions that are required for us to have a reasonable probability (in this case 66%) of limiting warming to 2ºC. In doing so, he referred to the graph below, produced by Figueres et al in 2017.[1] 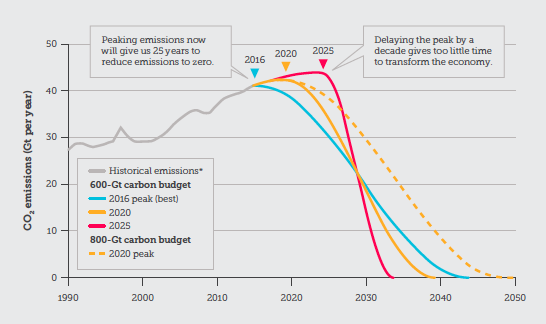 The graph shows that there is a very limited amount of fossil fuel that can be burnt if we want to limit global warming to less than 2ºC – that is, global emissions must peak very soon if we have any hope of meeting the Paris targets. Importantly, the graph also shows that the longer we take to reach peak emissions, the more difficult that task will become. In fact, according to Figueres et al., delaying peak emissions just a further five years would require an emissions reduction trajectory that would be economically or technologically impossible to follow in order to meet the Paris targets.

As Professor Steffen explained, the current rate of human emissions of CO2 is about 10 Gt C per year. So at the present rates of emissions, the carbon budget would be consumed in approximately two decades (by about 2040).[2]

In response to Professor Steffen, the mining company led evidence from economist, Dr Brian Fisher. Dr Fisher had a different concept of the carbon budget, one that places a greater reliance on carbon sinks. Nonetheless, the underlying climate change science that Professor Steffen presented to the Court was not challenged by the mining company, and both experts agreed that countries around the world need to take significant action to reduce GHG emissions to avoid dangerous climate change.

However, the experts disagreed on what we should be doing in light of the scientific knowledge that we are currently on a pathway that will lead to temperature increases above 2ºC - that is, dangerous climate change.

The majority of GHG emissions from the mine project would come from burning the coal produced by the mine – known in the carbon accounting system as Scope 3 emissions. Dr Fisher argued that Scope 3 emissions only arise after the coal has been exported overseas and so should not be considered Australia’s responsibility.

However, Professor Steffen pointed out that any GHG emissions produced by burning Australian coal overseas are released into the same global atmosphere, where they become mixed, and affect the climate in the same way as is they were burnt in Australia. According to Professor Steffen, that is straightforward physics.

Another area of disagreement between the experts related to prioritising emissions. Dr Fisher highlighted that, “There are no governing structures under the Paris Agreement that predetermine how these reductions should occur. In particular, there are no sectoral or commodity-based emission targets or budgets”[3]. Dr Fisher’s view was that there needed to be a distinction made between thermal coal, which is used to produce electricity, and coking coal, which is used to make steel (in this case, the Rocky Hill mine would have mainly produced coking coal). Dr Fisher said that you need to apply socio-economic considerations to GHG abatement, and that a coking coal mine should not be the place to start reducing emissions.

Professor Steffen didn’t disagree with the concept of applying socio-economic considerations to GHG abatement, but emphasised that you can only do this in an environment where you are not increasing emissions. This must be the starting point in considering new projects.

Impacts of climate change in NSW

Importantly, Professor Steffen also explained that these concepts aren’t simply theoretical or global conversations, but are relevant to decision-making in NSW today. He gave evidence that on the current emissions trajectories, there is high to very high confidence that the region in which the Rocky Hill mine was proposed (the Upper Hunter Valley) will continue to see increased average temperatures, with more hot days and warm spells, increased intensity of extreme rainfall events and a harsher fire-weather climate. Decreases in winter rainfall are also projected for the region with medium confidence.[4]

In his evidence to the Court, Professor Steffen concluded:

“Most of the world’s existing fossil fuel reserves – coal, oil and gas – must be left in the ground, unburned, if the Paris accord climate targets are to be met. I say that because the exploitation, and burning, of fossil fuel reserves leads to an increase in CO2 emissions when meeting the Paris accord climate targets requires a rapid and deep decrease in CO2 emissions…

An obvious conclusion that follows from this fact is that: No new fossil fuel development is consistent with meeting the Paris accord climate targets.”[5]

The evidence of Tim Buckley

The Court also heard evidence from GG’s financial analyst, Tim Buckley (right). Mr Buckley’s evidence went primarily to the third key element of GG’s contention listed above, namely, that at the current time, under the current policy framework, approving the mine was inconsistent with the goal of avoiding dangerous climate change.

Mr Buckley’s evidence was that modelling of the international demand for coal showed that coal from the Rocky Hill project was not needed from a technology perspective – that is, the fact that the Rocky Hill mine would have produced coking coal did not mean it should be given special consideration, having regard to its climate change impacts. Mr Buckley stated that there are alternative sources of coking coal, and alternative technologies available, that could be used to produce steel, particularly recycling.

An important aspect of Mr Buckley’s evidence was the assumption that countries would meet their commitments under the Paris target. As modelled by the International Energy Agency, this would lead to changes in policy, including mechanisms such as a carbon price, and those mechanisms would drive the rapid up-take of alternative technologies for steel production - technologies which currently exist at commercial scales even though they haven’t been widely implemented.

In response, the mining company’s financial analyst, Paul Manley, suggested that the nature of this particular coal made it appropriate to approve the mine. He argued that there was rising demand for coking coal and that demand would continue for many years into the future. However, it became clear during the hearing that the assumptions underlying Mr Manley’s position were not consistent with limiting global warming to 2ºC.

In its judgment of 8 February 2019, the Court found that it was relevant to consider all GHG emissions arising from the mine (including Scope 3 emissions). The Court also found that although the relative amount of GHG emissions from the mine may be small, the aggregate emissions over the life of the project would be sizeable, and refusing the mine would prevent a meaningful amount of GHG emissions from entering the atmosphere. This is important in the context of climate change being a global problem that needs to be addressed by multiple local actions to mitigate emissions.

The Court found that:

“the Project will have significant and unacceptable planning, visual and social impacts, which cannot be satisfactorily mitigated. The Project should be refused for these reasons alone. The GHG emissions of the Project and their likely contribution to adverse impacts on the climate system, environment and people adds a further reason for refusal.”[6]

Where to from here?

Photo of Professor Will Steffen courtesy of The Climate Council. Photo of Tim Buckley courtesy of Institute of Energy Economics and Financial Analysis. 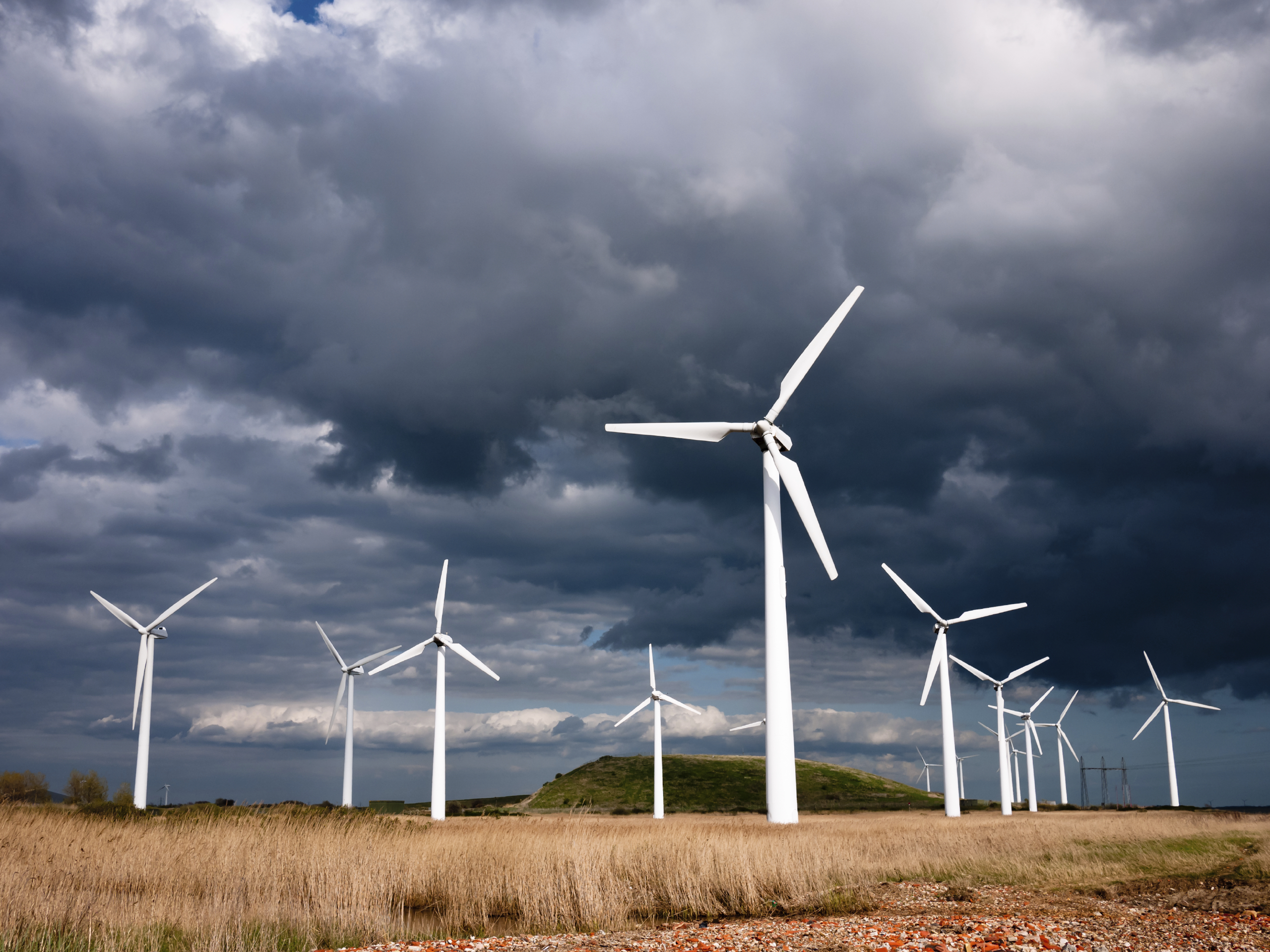 Sign up to receive updates on the EDO's climate litigation work, including news about any appeal of the Rocky Hill judgment.