Nine months after Macarthur Bushwalkers filed its case against BHP seeking orders to stop alleged pollution of the Georges River in the Illawarra, the NSW Environment Protection Authority (EPA) has required BHP to implement a program of works to protect this valuable river system. 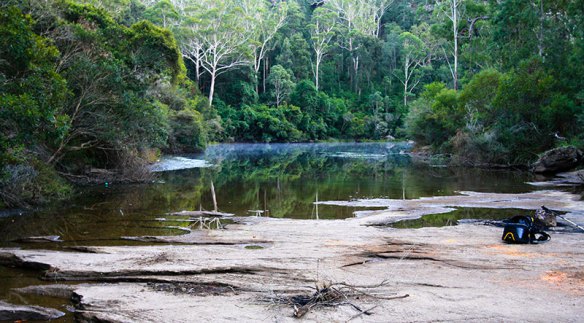 While the Court case has been stalled pending the EPA’s decision, the notice issued to BHP by the EPA just before Anzac Day is a great outcome for the community and the environment, in more ways than one. Not only has the EPA decided that BHP must stop polluting, but in the process, the EPA actively engaged with the public, seeking written submissions and meeting with community representatives face to face.

The litigation
EDO NSW filed the case against Endeavour Coal and Illawarra Coal Holdings, subsidiaries of BHP Billiton, on behalf of the Macarthur Bushwalking and Cycling Club (MBCC). Illawarra Coal owns and operates BHP’s underground coal mine West Cliff Colliery, near Appin, and Endeavour Coal holds the environment protection licence for the mine.

MBCC brought the litigation because the community was concerned that a range of chemical toxicants including arsenic, zinc, copper, aluminium and nickel were being discharged into the Georges River from the West Cliff Colliery via Brennans Creek at levels well above the Australian and New Zealand Environment Conservation Council (ANZECC) Guidelines for healthy river systems.

The Georges River is vitally important to the Botany Bay Catchment. Its headwaters are located 60km south-west of Sydney in the town of Appin, and the river flows past BHP’s West Cliff Colliery, north towards Liverpool, then east towards Sydney before discharging into Botany Bay.

MBCC alleged that pollution from BHP’s mine had been discharged into the Georges River via Brennans Creek for more than 10 years, since January 2002. MBCC argued that the pollution wasn’t authorised by BHP’s environment protection licence, and was therefore in breach of the Protection of the Environment Operations Act 1997 which prohibits the pollution of waters.

The EPA’s decision
Just ten days after the case was filed in Court, the EPA issued a media release advising that it was looking to place limits on BHP’s licence with respect to salt and metals being discharged into Brennans Creek. This was formalised in September 2012, when BHP applied to vary its licence seeking limits for a number of key pollutants alleged in this case including aluminium, nickel, zinc, copper, arsenic, lead and salinity. BHP’s licence variation application, if granted, would effectively authorise much of the pollution alleged in the Court case. This meant that MBCC’s case was put on hold while the EPA made its decision.

After nine months of consultations and negotiations with BHP and the community, on 24 April 2013 the EPA determined BHP’s application by issuing a licence variation notice which sets limits for a range of pollutants including those alleged in MBCC’s case. In other words, the notice authorises that pollution. Because of this, MBCC’s case may not be able to continue.

However, the EPA also took the important step of requiring BHP to stop polluting. Under its licence, BHP is now required to carry out a program of works to achieve 95% species protection in Brennans Creek and the Georges River by December 2016. The EPA has also required ongoing monitoring of ecological impacts during this period while the works are being constructed.

The EPA’s notice states that the requirement that BHP stop polluting is to ‘ensure that measures are taken to protect the environment from harm’, and ‘to protect or restore the environmental values’ of Brennans Creek and the Georges River affected by the discharge that has already occurred. This is in effect one of the key remedies that MBCC was seeking through the Court case – orders to stop the alleged pollution – and as such represents a win for the community.

Community participation in pollution licensing – a precedent
Aside from the environmental outcomes achieved, it is important to consider the way in which the EPA came to its decision in this case.

Traditionally, licensing decisions have been made between the regulator and the licensee, with little (if any) public involvement. However, in this case, the EPA consulted with the public on BHP’s application, accepting public submissions, and meeting with community representatives to hear their views and receive advice from independent experts.

The EPA’s decision to involve the public in this licensing process serves as a valuable precedent for other licensing decisions, particularly where there are real concerns about actual or potential environmental harm, as was the case here. In this case, submissions made to the EPA included independent expert reports containing the results of water monitoring, assessment of ecological impacts and feasible treatment options. This case demonstrates the public’s ability to constructively contribute to licensing processes, and should encourage the EPA to open up its doors to the community when major decisions are being made about how to deal with pollution.

*Elaine Johnson is a Solicitor at EDO NSW