EDO NSW has assisted rural communities and landholders in their efforts to protect agricultural land from unsustainable developments.

The Hunter Environment Lobby, represented by EDO NSW, successfully defended Ashton Coal’s appeal of a Court condition imposed on the company’s expansion of its coal mine near Camberwell in the Hunter Valley.

Ashton Coal appealed the decision in the NSW Court of Appeal. The Court dismissed the appeal in November 2015, meaning that Ashton Coal to needs to purchase, lease or licence Mrs Bowman’s property before it can start the project. 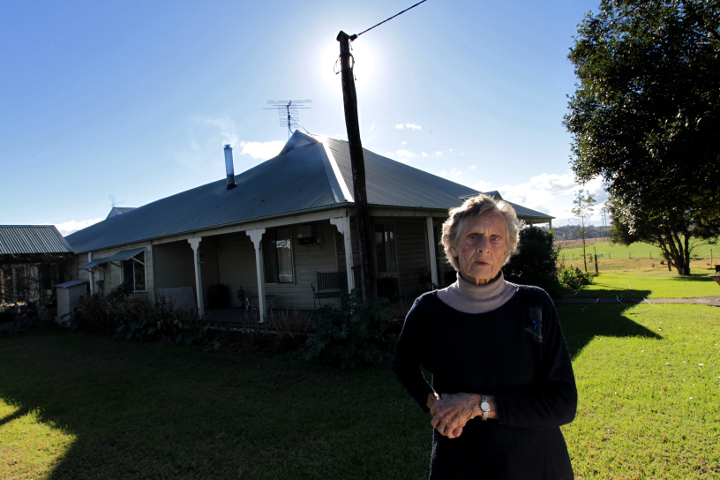 Update: In November 2015 the NSW Court of Appeal dismissed Ashton Coal’s appeal of the decision in this case. Read about the appeal.

The Hunter Environment Lobby, represented by EDO NSW, appealed the NSW Planning Assessment Commission (PAC)’s 2012 approval of Ashton Coal’s expansion of its open cut coal mine next to the village of Camberwell in the Hunter Valley. The PAC had previously refused the expansion in December 2011, finding that it would have unacceptable impacts on human health due to air pollution, and on water resources, including Glennies Creek and the Hunter River. The refusal was based on submissions from the NSW Department of Health (including a report by the CSIRO) detailing regular breaches of air quality standards at Camberwell, and the NSW Office of Water, both opposing the project. However, the PAC’s 2011 refusal was reversed after the submission of a new report on health and water impacts by the NSW Department of Planning, and the PAC granted approval for the expansion to proceed in 2012.

The Land and Environment Court heard the Hunter Environment Lobby’s appeal in September 2013. The group was concerned about the impacts of the mine expansion on the health of nearby residents as a result of dust emissions (PM10 and PM2.5), loss of Aboriginal cultural heritage, reduced agricultural productivity, threats to key water resources and the economic justification for the project. The case was heard in Sydney, but the Court also attended a site visit in Camberwell, followed by the hearing of objector evidence. The Court also heard expert evidence from hydrologists, economists, air quality experts and archaeologists.

The Court determined that the approval could be granted for the expansion but that it must be subject to adequate conditions. Importantly, the Court determined that no development could be commenced by Ashton Coal until it has acquired “Rosedale”, a property which is located in the proposed mine pit, from its owner Mrs Wendy Bowman. This is because the project had been assessed on the basis that the Mrs Bowman would not be living there during the life of the project given the severe impacts from the mine on the residence. The Court also imposed a compensation condition for two neighbouring rural properties heavily impacted by the mine, including a dairy farm which has been in the same family since the 1830’s, one of the oldest farming families remaining in the Upper Hunter.

The Court also imposed strengthened conditions relating to the management of impacts to biodiversity, blasting conditions and land acquisition. With regards to dust, the Court declined to impose any specific criteria for fine particulate matter (PM2.5) given that current air quality standards for PM2.5 are only advisory. However the Court did strengthen conditions relating to the public’s ability to access information on air quality monitoring undertaken by Ashton.

EDO NSW is grateful to barristers Robert White and Corrina Novak who acted as Counsel for the Hunter Environment Lobby.

Orders and conditions of consent

An access arrangement had been entered into by Hume Coal Pty Ltd with a landowner (neighbouring the Alexanders' property) who owns the property where prospecting is taking place (Mr Koltai). To access Mr Koltai's property for prospecting, Hume Coal Pty seeks to use a carriageway located on the Alexanders' land. However Hume Coal has not entered into an access arrangement with the Alexanders. Further, restrictive covenants have been placed on both of the relevant properties that restricts the land from being used for commercial or industrial purposes.

On 7 December 2012 Hume Coal's application for an interlocutory (interim) injunction was refused. Hume sought to restrain the Alexanders from allowing invitees onto their private land (the invitees had formed a blockade on the carriageway) preventing Hume Coal from accessing Mr Koltai's property via the carriageway in order to conduct prospecting operations. The judgment refusing the interim injunction can be found by clicking the Judgment - interlocutory injunction below.

In proceedings before the Court on 14 December 2012 Hume Coal Pty Ltd was successful in seeking an order that the matter be expedited. Read the judgment by clicking the Judgment  - proceedings expedited link below.

The final hearing of Hume Coal's application for a final injunction against the Alexanders was heard by the Land and Environment Court on 18 February 2013. On 3 May 2013 the Court granted a final injunction to Hume Coal to use a carriageway in the Southern Highlands to undertake exploration activities, and ordered the owners of the carriageway, the Alexanders to take steps to prevent third parties blockading it. Hume Coal had originally sought an interim injunction that was refused in December 2012. In granting the final injunction, the Court has allowed Hume Coal to use the carriageway on the basis that the Mining Act 1992 essentially overrides the rights of landowners and provides for terms of access for exploration.

The Court rejected the argument of the Alexanders that the mining company required an access agreement with them prior to use of the carriageway. The Court also rejected arguments that a restrictive covenant on the property which sought to prevent industrial uses prevented mining exploration. The decision to grant Hume a final injunction can be found by clicking the Judgment below.

EDO NSW is grateful to barristers Ms Jane Needham SC and Mr Simon Chapple for their assistance in these proceedings.

Judgment - Hearing of the proceedings expedited

EDO NSW successfully represented The Hub Action Group, a group of local residents opposed to a proposal to develop 'the Hub' regional waste facility on agricultural land near Molong.

The proposal was opposed primarily because it was likely to limit the ability to use the land for agricultural purposes, even after closure of the landfill. Productive agricultural land is a scarce resource which needs to be protected for future generations.

In a decision handed down on 17 March 2008, Justice Preston of the Land and Environment Court agreed that the proposal was not sustainable, partly because it was likely to adversely affect the long term use, for sustained agricultural production, of the area and the adjoining prime crop and pasture land.

EDO NSW is grateful to barristers Malcolm Craig QC and Ian Hemmings for their assistance in this matter.