Gloucester coal mine hearing: Week one

The hearing into the proposed Rocky Hill coal mine at Gloucester opened in the Land and Environment Court in Sydney last Monday 13 August 2018. 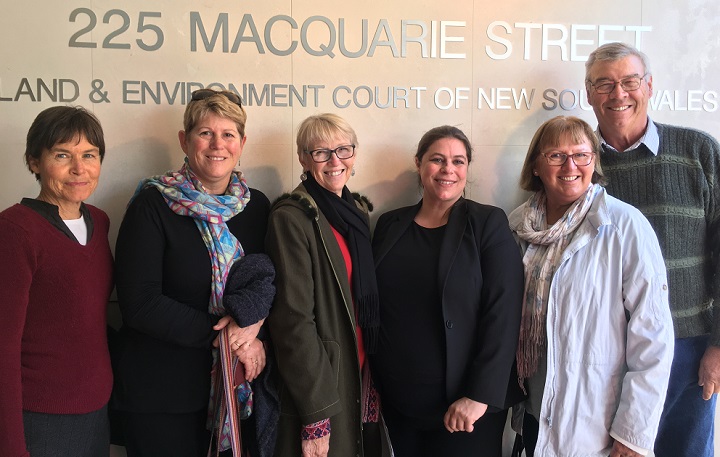 Elaine Johnson, Principal Solicitor EDO NSW (3rd from right) with members of Groundswell Gloucester on the opening day of the hearing.

Submissions from the four parties (Gloucester Resources Ltd (GRL), Yancoal Australia, the Minister for Planning and Groundswell Gloucester represented by EDO NSW) were heard over the next day and a half before the Court travelled to Gloucester, three hours away in the upper Hunter.

At Gloucester, the Court held site visits and spoke to community objectors, including farmers, residents and a 13-year old girl, who spoke about the need to avoid dangerous climate change for future generations, at their homes on Wednesday and Thursday morning.

A public hearing on Thursday afternoon was packed with about 130 people. Community objectors speaking at this hearing included farmers on the reality of climate change impacts in agriculture; local residents on the threat of noise and dust from the open cut mine; local tourism operators on harm to their industry as a result of mining and climate change; residents and business owners on the impacts of the mine on the social fabric of the town; a doctor on the mental and physical impacts of mining and climate change on people in the valley; Traditional Owners on the need to protect cultural heritage; and a teacher on the risk to children’s health from poor air quality caused by open cut mining.

The Court has now returned to Sydney. Over the next week it will hear from expert witnesses on visual impacts (Monday 20 August), climate science and finance (Tuesday 21 August), noise and economics (Wednesday 22 August), town planning (Thursday 23 August) and social impacts (Friday 24 August).

Background: The Land and Environment Court is hearing a challenge from Gloucester Resources Limited and Yancoal Australia to the refusal to approve a greenfield mine application, known as the Rocky Hill Coal Project, and the associated modification to the Stratford Coal Extension Project. Environmental Defenders Office NSW and counsel Robert White are acting for Groundswell Gloucester who are a respondent in this case.

More on our site: