A Hunter Valley community group is seeking to protect the critically endangered Regent Honeyeater (pictured) by taking legal action against Cessnock Council’s approval of a steel fabrication facility on land which includes potential habitat for the rare bird. Update March 2016: The Court found in favour of our client. Read more 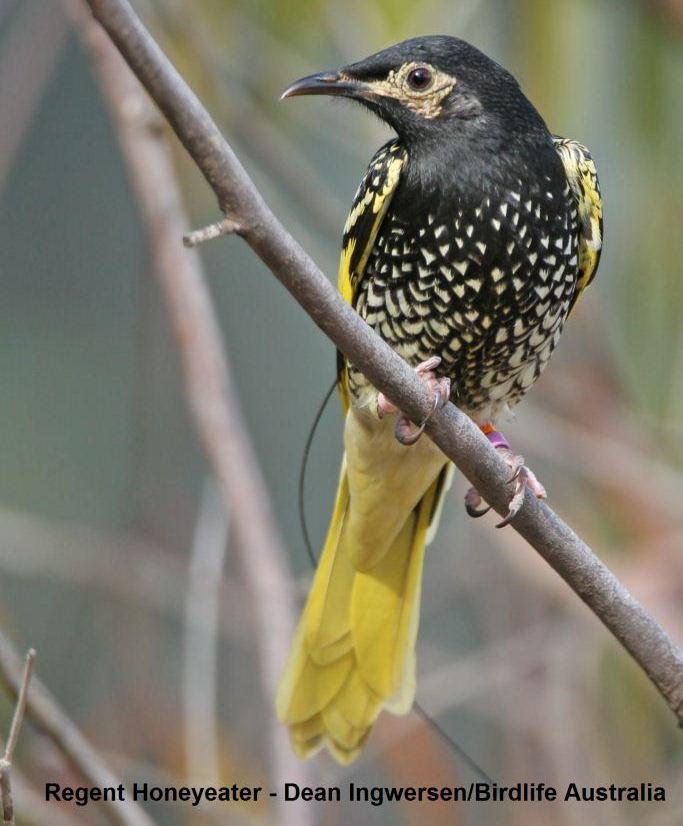 The Friends of Tumblebee, represented by EDO NSW, has launched legal action in the Land and Environment Court challenging the council’s approval of the development which would clear 3.2 hectares of a forest which provides habitat for the Regent Honeyeater. On 7 February the Court will set a timetable for hearing the case.

This forest is located in the Hunter Economic Zone, within an area that is considered one of the few remaining viable breeding sites for the Regent Honeyeater in Australia, supporting about 10 per cent of the national (and therefore global) population of between 350 to 400 birds, according to the latest expert assessment.

The Regent Honeyeater (Anthochaera Phrygia) was recently added to the critically endangered list under the NSW Threatened Species Conservation Act 1995. This classification means there is an extremely high risk the species will become extinct in the wild if action is not taken to assist its recovery.

Friends of Tumblebee claim that the proposed development, by A.B.T. Morton Pty Ltd, is likely to significantly affect the Regent Honeyeater, and therefore the development application should have been accompanied by a Species Impact Statement (SIS).

The purpose of an SIS is to provide the Council with detailed information about how the proposed development would affect the critically endangered Regent Honeyeater, and to assist the Council in deciding whether or not to approve the development.

The council approved the development in October last year, without an SIS, despite advice from its own ecology officer that one was required because the development is likely to significantly affect a number of threatened species and communities, including the Regent Honeyeater and its habitat, and the Lower Hunter Spotted Gum Ironbark Forest, an endangered ecological community.

Nationally, Australia has experienced the largest documented decline in biodiversity of any continent over the past 200 years. Australia’s rate of species decline continues to be among the world’s highest, and is the highest in the OECD.

Animals already extinct include; the Tasmanian Tiger, the Eastern Bettong, the Rufous Hare Wallaby (south-west mainland), the lesser Bilby, the long-tailed hopping mouse or Koolawa and the desert bandicoot.

Many more are facing the threat of extinction in the wild such as; the Tasmanian devil, the mountain pigmy possum, the northern quoll, the blue whale, long-footed Potoroo, the Macquarie Perch, the yellow-spotted tree frog,  the leatherback turtle, the pygmy blue tongue lizard, the red-tailed black cockatoo, the Swift Parrot and the grey-headed albatross.

Habitat loss and fragmentation, introduction of invasive species and pollution are among the major causes of species extinction.  Climate change is also a major threat to biodiversity.

NSW has a range laws designed to ensure the continued survival of threatened plants and animals. However, they need to be properly applied in order to be effective. Where particular laws are not followed, the community has an important role to play in enforcing the law.