27 November 2018: In a case demonstrating the critical role community organisations play in holding elected officials to account,  the Federal Court has upheld a challenge by the Environment Council of Central Queensland (ECOCeQ) – represented by EDO NSW – to a proposal to clear 2,100 ha of native vegetation on Kingvale Station on the Cape York Peninsula in the Great Barrier Reef catchment.

Early in 2018, the Federal Minister for the Environment decided that the proposed clearing could undergo the least rigorous form of environmental assessment available under Commonwealth environmental law.  The Minister was required, among other things, to be satisfied that the degree of public concern about the action is, or is expected to be, ‘moderately low’.

The Minister has now conceded that decision was not made lawfully. 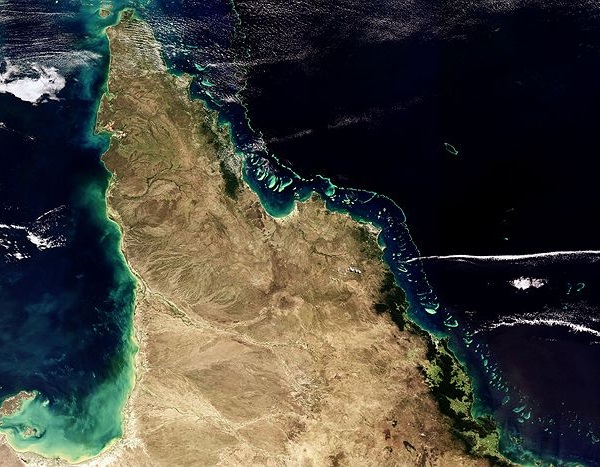 ENVISAT satellite image of the Great Barrier Reef alongside the York Peninsula.

“The Act deliberately applies a strict test that must be satisfied before the Minister can opt for the least rigorous assessment,” David Morris, CEO of EDO NSW, stated.

The Government’s own experts found that the proposed clearing would have a significant impact on the Great Barrier Reef and a number of threatened species.

The Minister must now go back to the drawing board to decide afresh how the environmental impacts of the proposal will be assessed. Steps that have been completed since the Minister made the original assessment decision are now void, including the Secretary’s draft recommendation report that was published online for comment in April 2018.

What follows next will depend on the assessment methodology selected by the Minister. Whichever approach is selected, there will be further opportunity for the public to comment on the proposed clearing.

Christine Carlisle, President of ECOCeQ, said ‘We hope the Minister rejects the tree clearing proposal outright, since it will destroy habitat for threatened species, the bulldozing of the forest will contribute to climate change, and there can be no guarantee that sediment run-off from this huge area will not make its way into Princess Charlotte Bay and then on to the Reef.’

‘We trust that the Minister for the Environment will act in the best interest of the environment, and not rubber stamp this dangerous proposal. The Minister received 6,000 public comments when this clearing was first proposed, and I hope the public responds again to ensure this proposal is not approved at any level,’ she said.

This case illustrates yet again the value of the extended standing provisions in the Environment Protection and Biodiversity Conservation Act. Without community groups like ECoCeQ, and lawyers to represent them, this unlawful decision would have proceeded without scrutiny and key safeguards for our environment ignored.