Launch of ‘Mining Law in NSW: A Guide for the Community’ - EDO NSW

Launch of ‘Mining Law in NSW: A Guide for the Community’

This week’s launch of EDO NSW’s Mining Law in NSW guide has turned out to be an incredibly timely reminder of a critical but often little understood role that the Environmental Defender’s Office has played for decades. 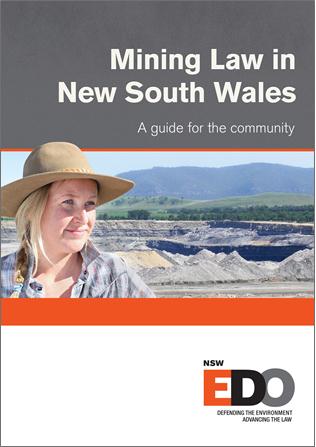 We provide a relief valve for communities and individual landholders who feel beset by powerful forces like government agencies and big mining companies, and who contemplate more extreme action if they can’t get help under the law.

For the launch of the mining law guide we invited representatives from three different communities who are grappling with coal and coal seam gas (CSG) development projects to join us in Sydney and tell their stories.

Unlike us lawyers, who can be more guarded in our public commentary, these are people who say exactly what they think. It reveals the depth of emotion that exists when people are confronted with a danger to their community and their natural environment.

Space doesn’t allow me to do justice to all of what was said when our panel guests, Julie, Peter and Scott, described their communities, their challenges and their frustrations. But let me share a taste:

As professional lawyers, the EDO NSW team deals every day with community representatives like Julie, Scott and Peter who are looking to protect the environment, their communities and their assets. Our telephone advice line takes 1,500 calls a year from across NSW.

Emotions can run high, but our job is to help our clients and their communities to navigate within the law, when a clear public interest environmental law issue arises. Our Mining Law in NSW guide is for everyone who looks to the law to give them and the environment a fair go.

NOTE: The guide was funded by the NSW Government through the Environmental Trust, and includes input from the Department of Planning and Infrastructure. This has allowed EDO NSW to address a notoriously complex area of the law and we are extremely grateful for this support.