A tribute to Murray Wilcox

Jess Feehely writes: EDOs of Australia was saddened by the news that Hon Murray Wilcox AO QC, who was instrumental in establishing the network of EDOs and advancing environmental governance across the country, passed away last week.

17 November 2018: I had the great honour of delivering a tribute to his contribution to environmental law at a Law Council event earlier this year. His Honour was characteristically generous with his time in helping me prepare the tribute, sharing stories of his childhood, motivations, professional highlights and advice for the next generation of lawyers. He offered both insight into the deficiencies in our current system and hope that all is not lost.

The brief tribute below can’t possibly do justice to his distinguished career, his gentle intellect or his dedication to the environment. However, the work that EDOs do every day is a testament to his vision and our commitment to do justice to his legacy.

Jess Feehely, Chairperson of the  Australian Environment & Planning Law Group of the Legal Practice Section of the Law Council of Australia and Principal Lawyer EDO Tasmania 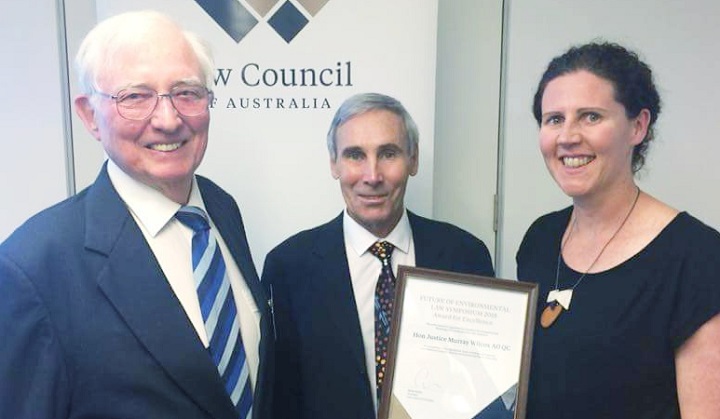 At the Law Council of Australia’s Environmental Law Symposium on 19 April 2018, I had the honour of delivering a tribute to the Honourable Murray Wilcox AO QC for his outstanding and ongoing contribution to environmental jurisprudence. When I asked his Honour when he became interested in conservation, he spoke fondly of childhood bushwalks with his mother and his love of the ocean, and said:

When you have a love or a respect for the environment and see  it  being  degraded, there comes a point where you realise that you have little choice but to do something about it.

A significant proportion of his Honour’s impressive career has been spent doing something about it.

After graduating from Sydney Law School in 1960, his Honour practiced as a solicitor, specialising in planning and local government law, until being called to the Bar in 1963. When he discovered that there was no text providing guidance on the regulation of development, he was encouraged by a mentor, Justice Sugerman, to write one. A delegate at the Symposium brought with her a well-thumbed first edition of The Law of Land Development in New South Wales,1 the coloured tags and margin notes indicative of how useful this seminal text had been.

Justice Wilcox was appointed Queen’s Counsel in 1977 and continued to pursue his interest in environmental law through his busy practice. He served as founding Chair of the New South Wales Environmental Law Association and as President of the Australian Conservation Foundation from 1979 to 1984. His Honour described this term, which included the Franklin Dam campaign, as “a fantastic period of his life” which gave him a huge respect for the expertise, diversity and dedication of activists protecting places that they cared for.

His Honour was appointed as a judge of the Federal Court of Australia in 1984. His judgments were well-crafted and analytical, maintaining his Honour’s commitment to transparency, accessibility and rigorous assessment. This commitment was further demonstrated through his participation, along with Professor Rob Fowler and others, in a judicial education program supporting improved environmental enforcement in the Indonesian Supreme Court.

Justice Wilcox will long be remembered for his landmark Noongar native title decision,2 delivered days before his retirement in 2006. Though overturned on appeal,3  the bold decision marked a critical recognition of the legacy of dispossession and the continuing strength of Aboriginal connection to country.

Changing attitudes towards a changing climate

Never one to let an opportunity to advocate for rigorous decision-making pass, Justice Wilcox used his retirement speech to encourage his judicial colleagues to take seriously the issue of climate change. He urged them to watch An Inconvenient Truth4   to learn more about the threats posed by climate change and to consider its implications in all their decision-making.

Justice Wilcox continues to be dismayed by Australia’s lack of action on climate change and the short-sightedness of political leaders. He recollects reading articles on climate change decades ago with detached curiosity, feeling at the time that predictions for 2050 or 2100 were too distant to be of anything more than academic interest. This perspective changed with the arrival of his grandchildren and great-grandchildren:

When you consider that your great-grandchildren are likely to be alive in 80 years, 2100 matters. Predictions of higher sea levels, higher temperatures, and harsher living conditions become more meaningful. I truly wish that our political leaders could make that connection. Despite having families, they often fail to acknowledge the impacts of their actions or, more significantly, their inactions, on the people that they love.

Observing a tendency for ideology to prevent action on climate change, even in the face of overwhelming evidence of the need for action, his Honour has advocated for the establishment of an independent Commonwealth Environment Commission. He believes such a body is essential to ensure that science, rather than politics, dictates our policy responses to environmental issues.

When asked about the proudest achievement of his career, Justice Wilcox had no hesitation in nominating his role in establishing the Environmental Defenders Office NSW (EDO NSW) in the 1980s. His roles with the Australian Conservation Foundation and the Environmental Law Association exposed him to both the scale of environmental concerns confronting the community and the difficulty of finding affordable legal representation in an emerging, specialist field.

Together with Professor Ben Boer, Justice Brian Preston and others, his Honour established EDO NSW to ensure environmental issues were addressed by dedicated lawyers with the expertise and tenacity to match their well-funded opponents. He watched with pride as the EDO network flourished across Australia and, following his retirement from the Federal Court, resumed a stewardship role as Chair of EDO NSW from 2007 to 2013.

Justice Wilcox has long been a vociferous advocate for independence, transparency and third-party rights of appeal, elements vital to empowering citizens to do something about environmental degradation. His Honour has said:

One key reform that will improve environmental outcomes is increasing public access to information. Where secret deals continue to be done between developers and governments, and the public is denied information on the basis of commercial-in-confidence or Cabinet exemptions, rigorous assessment cannot occur. Where projects have the potential to completely reshape a city, or a place, it’s outrageous that the public faces so many hurdles to find out what’s going on.

Through his initiative and advocacy, Justice Wilcox laid the foundation for public interest environmental law in Australia and then continued his efforts to strengthen it through all that he did. As a lawyer working within the EDO network, I am indebted to him, not just for creating a job that I love, but for recognising that access to environmental justice is critical to a functioning society and making support available to help people to protect places that matter to them.

Shaping the next generation of environmental laws

As with most tenacious people, retirement for Justice Wilcox has not meant quietly tending the roses. In addition to chairing EDO NSW, he authored a book making the case against the proposed Browse Basin liquefied natural gas plant and has been an active member of the Australian Panel of Experts in Environmental Law (APEEL) since 2014, turning his wealth of experience to recommending ways to improve environmental governance in Australia.

Chief amongst these recommendations is a drastic increase in the role of the Commonwealth in environmental regulation. While enactment of the Environment Protection and Biodiversity Conservation Act 1999 (Cth) made a move towards centralising responsibility, his Honour believes that far more needs to be done at the federal level.

Professor Rob Fowler, chair of APEEL, described Justice Wilcox as an inspiration and acknowledged his conviction, commitment and vision and his passion for protecting Australia’s wonderful environment.

When reflecting on his career, motivations and achievements, Justice Wilcox was characteristically humble:

One thing leads to another in life. Like so many others working in environmental law, I’ve taken on work because it was interesting and important. And I’ve enjoyed myself immensely along the way. I don’t need thanks. My reward has been the life that I’ve been able to lead and the joy and satisfaction that it has given me. It’s been an absolute privilege.

Although Justice Wilcox may not need them, he is richly deserving of our thanks. For decades, he has pushed Australian environmental law closer to objectives of fairness, accessibility and sustainability.

The Honourable Justice Wilcox AO QC loves the environment, he respects the role that law plays in protecting it and he continues, in all facets of his life, to do something about it.

Thanks to the Australian Environment Review for permission to reprint this article.