Should all environmental charities have to plant trees? - EDO NSW

Should all environmental charities have to plant trees?

You may have heard that environmental charities are for the first time being required to report how much they spend on ‘on-ground environmental remediation’. This is part of a controversial move to restrict charitable environmental groups to activities such as tree planting, despite current rules that recognise the benefit of education, advocacy and other community services. Remediation is important, but should all environmental charities have to plant trees? That’s the question now being asked as the Treasury consults on how tax-deductible public donations are treated.

For decades, environmental organisations on the Register of Environmental Organisations (REO) have been eligible for tax-deductible donations – encouraging private funding for the public good. But in 2016, half the members of an Australian parliamentary inquiry on the REO proposed that to remain eligible, all environmental groups must spend at least 25 percent of their public donations revenue on ‘environmental remediation work’. They said remediation would include tree-planting and similar activities, but exclude environmental research, community education, overseas environmental protection, and the free community legal services provided by Environmental Defenders Offices around Australia. The proposal split the Committee, while other administrative changes received broader support.

Imposing a minimum spend on remediation would single out environmental charities and divert more of their limited resources to administrative reporting. It would also require many well-established environmental charities – including EDOs – to either radically alter the way they operate; inefficiently divert money to other groups at the Government’s direction; or lose eligibility for tax-deductible donations altogether. It would do all of this based on an arbitrary and narrow interpretation of protecting the environment.

Following on from the 2016 REO inquiry, a 2017 Treasury consultation paper is now proposing various changes to the administration of all Tax Deductible Gift Recipients (or DGRs – most of which are also charities). The paper asks what the public thinks about the ‘minimum spend’ proposal for environment groups. It even floats the option of increasing the minimum proportion to 50 percent of donated funds.

This proposal would essentially be taking up the arguments made by the mining and resources lobby, including the Queensland Resources Council and the Energy Resources Information Centre (funded by the gas industry).

We’d be surprised and disappointed if more weight were given to the resources lobby than to the hundreds of environment groups, community members, donors and governance experts who made submissions to the REO inquiry. Many pointed out the pitfalls of artificially distinguishing 'on-ground' rehabilitation from other important things that environmental charities do in pursuing their public purpose. Their evidence led to half the parliamentary committee – one Liberal and five Labor members –  rejecting the minimum 25 per cent spending proposal.

Of course, restoring our land and waters is worthy of tax-deductible status. But it’s not sufficient if the overall public purpose is to protect the environment. Remediation attempts to fix damage done to the environment. But it’s far preferable to prevent damage in the first place, and that’s where law reform, public education, research, advocacy and professional legal services all play their vital role. 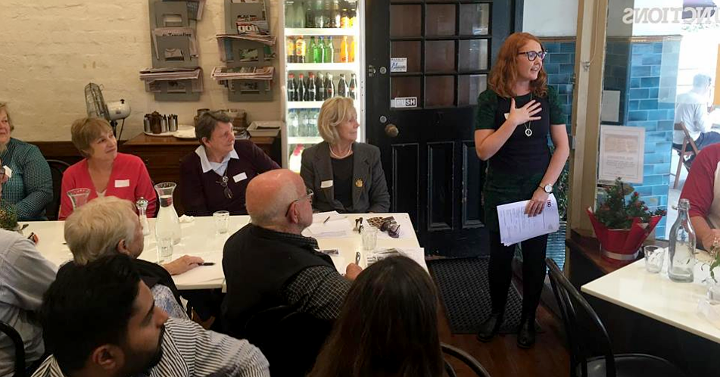 Our Outreach Director Emily Ryan presents at a community workshop on how to engage in law reform.

Legal, educational and advocacy activities are widely recognised for their ‘public good’

Australian charity law has long recognised that protecting the natural environment is a public good. It says this in the Charities Act 2013 (Cth). So too did an independent inquiry into charitable definitions in 2001, the Productivity Commission's 2014 inquiry into Access to Justice, and the 2016 REO inquiry itself.

Importantly, many of these sources affirm the need for environmental services beyond remediation that many environmental charities provide. For example, the High Court’s Aid/Watch judgement (2010) and the Charities Act recognise that raising public awareness through advocacy is itself a charitable purpose – and an 'indispensable' part of an informed democracy. In the words of an EDO NSW client: “In a democratic society we consider that that the EDO is an essential resource for community groups such as ours …..the work being done by the EDO is vital for the future of this country.”

Environment groups provide an essential window for collaboration on public policy development. Their established grassroots links and experience create a dialogue between local communities and central policy-makers, where local voices may not otherwise be heard. For example, since 1985, EDO NSW has developed extensive networks with local communities through our legal outreach, advice and casework, policy and law reform expertise and our free legal advice line. Two-thirds of the people who call us with environmental and planning law problems are from regional or rural areas.

There are many other organisations providing equally important services such as research, environmental education and public advocacy, who would not meet a new test for ‘on-ground environmental remediation’.

CSIRO research on Australian attitudes to mining also shows that the public wants environmental accountability. While no sector is trusted absolutely, information from non-government organisations (NGOs) is often more highly regarded than information from government or industry.

It is worth investing in groups and services like these because NGOs can provide them at low cost, and at arms-length from government decision-making or ministerial direction. Allowing for tax-deductible donations is an efficient way to strengthen public participation, access to justice and the rule of law.

It may suit some narrow private interests to ask the Government to constrain environmental voices, to restrict community access to legal services, and place new administrative burdens on the charity sector. But it's not in the public interest, nor what the broader community would expect of our charity and tax laws. That's why our current laws and comparable overseas countries focus on charities' purposes – rather than attempt to define their activities.

This year, all organisations on the REO are for the first time ever being required to report the amount (in a percentage) they have expended on ‘on-ground environmental remediation’. But that will only ever capture a narrow part of what it means to protect the environment – a public purpose that requires so much more.

A short time remains to have your say on this issue. As Treasury finalises its DGR reforms proposals, will the Australian Government support a strong and diverse role for environmental charities into the future? Public submissions on the paper are due by Friday 4 August 2017. Have your say about the reforms at the Treasury’s website.

EDOs of Australia has made a detailed submission available here.