After 12 years at EDO NSW, the last two as CEO, Sue Higginson is bowing out. We asked about the highlights – and low points – of her time at the EDO and how she stays hopeful.

Q: Your home is in the Northern Rivers – how did you arrive there? 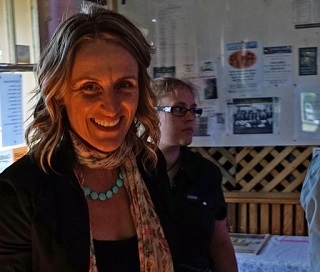 I spent the first decade of my life in England. In the early ‘80s my family migrated to Australia, settling in Melbourne. I’d only been in Australia for a couple of days when my dad took us to a temperate old growth forest which had patches of rainforest and the most colourful birds I’d ever seen. I fell in love! I’ve loved the Australian environment ever since.

When I finished high school I moved to the beautiful biodiverse Northern Rivers, where I worked for many years as a campaigner to protect the last of the old growth forests in north east NSW. I have called the Northern Rivers home ever since. Image: Sue at an EDO NSW fundraising event in Lismore.

Q: What led you to do law? Has it been what you thought it would be?

It was my work as an environmental campaigner and the advice of a very good friend (a lawyer) that led me to study law. I had young children so didn’t know how I would get on, but I loved it and did really well ­ I graduated with first class honours and won the university medal. I learnt early on that the law could be a very effective and powerful tool to protect the environment, so I was very motivated.

I love being a lawyer working for justice. Being able to practice at EDO NSW is even better than I hoped it would be. Serving and empowering the community through the law has been my dream job.

Q: What are you going to do once you finish at EDO NSW?

Since I took on the role of Principal Solicitor nearly five years ago, I have spent a lot of time away from my home and family in the Northern Rivers. I have just become a grandma, so it’s time for me to go home and have a short break. I’m not sure exactly what I will do next, I have many plans and I’m sure it will involve continuing to work to protect the environment. It’s what I do.

Q: What’s been the most surprising or satisfying experience while you’ve been at the EDO?

One of the most defining moments during my time at the EDO was when the NSW Land and Environment Court overturned the approval for Rio Tinto’s Warkworth open cut coal mine extension (the Warkworth case). This symbolised a real turning point in environmental law and decision making. It was no longer the case that economics would, by right, trump negative impacts on the environment and community. While there had been political decisions that favoured the environment or community over short term profits in the past, the Warkworth case did it through economic, social and environmental analysis and the application of legal reasoning.  And that is now in the law books on the public record forever.

Q: What’s been most disappointing in the environmental law space over the past few years?

It is extremely disappointing and unfair when the community plays by the rules to protect the environment and hold decision makers to account under the rule of law and wins, then the rules are changed to allow wrongful development to go ahead.

The most recent example is the response to our client’s win in the NSW Court of Appeal to protect Sydney’s drinking water catchment from coal mine pollution. Our client was able to show that the mine’s approval was granted unlawfully as it will not have a neutral or beneficial effect on water quality. In fact the mine will be belching millions of litres of mine water into the headwaters of Sydney’s drinking water catchment. Rather than allowing the court to sort out a proper and lawful resolution to the case, the mining company persuaded the NSW Government to pass special laws legalising the mine’s wrongful approval.

Another version of this is when governments threaten to change laws or take administrative action to stifle communities from accessing the courts to seek environmental justice.

The classic example of this was when we challenged the Australian Government’s approval of Adani’s Carmichael coal mine on behalf of the Mackay Conservation Group. We were successful because the Australian Environment Minister had failed to properly follow the law. He admitted as much and so we all agreed that the Federal Court should set aside his approval. It was an example of the rule of law working well.

Imagine my surprise when I saw the then Prime Minister, Tony Abbott, and the Attorney-General, George Brandis, demonising our court action and our client, referring to us as vigilante litigants engaging in lawfare! I was so shocked that something could be framed so wrongly. I was even more shocked when the Attorney-General, the first legal officer, sought to change Australian environmental law so that community groups couldn’t bring legal cases which seek to hold decision makers to account under the law. Fortunately for the rule of law and the pursuit of environmental justice, this did not pass through Parliament.

There are more subtle versions of this. For the past five years it is the practice of the NSW Planning Minster to require every large resource project to be referred to the Planning Assessment Commission for a public hearing. When the Commission holds a public hearing, members of the community lose their rights to appeal any approval of that project to the specialist environment court. Denying access to justice is not in the public interest.

Q: Given the avalanche of bad news on the environment, how do you stay hopeful – if you do? 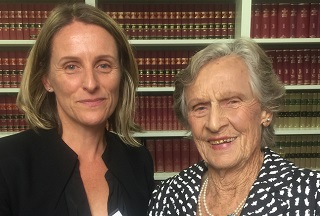 It is very easy to stay hopeful. Every day I work with wonderful people who are committed to protecting the environment for future generations. Working in the pursuit of environmental justice, as hard as it can be, is very rewarding. It involves being positive and having an optimistic vision. When we work to protect the environment we are doing so in the public interest, it often involves speaking up for things and places that cannot speak for themselves; there is usually an aspect of necessity to the work, so there is no time not to be hopeful. Image: Sue with our Hunter Valley client and Goldman Environmental Prize winner, Wendy Bowman.

Q: What will you miss?

Working at EDO NSW is an absolute privilege. It is incredibly inspiring working with such great people, who understand what an important institution the EDO is – from staff, volunteers, barristers, Aboriginal elders, members of the judiciary, members of Parliament and the public service, independent technical and scientific experts, academics and members of the community.

I won’t miss the all-nighters and the 15-hour day average! For some reason I just never got around to pioneering the work-life balance!

Q: Which change to environmental law would you most welcome?

There are many aspects of our environmental legal system that I view as world class. However, there are still things I would like to change. Fairness and balance needs to be better built into the system in terms of environmental and community justice. Mostly I would like to see an absolute end to extinction. This would involve requiring legal obligations to recover threatened species and eco-systems away from the brink of extinction and addressing our climate-changed future. 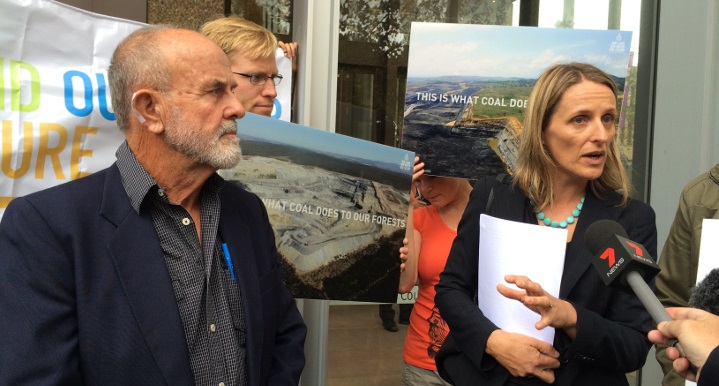 Speaking to the media after the 2014 Bulga victory.