Threats to wetlands in the Murray-Darling Basin - EDO NSW

Threats to wetlands in the Murray-Darling Basin

Sadly, wetlands are among the most threatened ecosystems on the planet. Australia’s Murray-Darling Basin wetlands are no exception.

While many wetlands in the Murray-Darling Basin naturally cycle between wetter and drier periods, drier periods have recently become significantly longer.

The main reason for this is long-term overconsumption of water for human use, particularly irrigation for agriculture.

This over-use has resulted in many wetlands in the Basin dwindling to a fraction of their original size, or struggling to maintain the delicate balance of water, soil nutrients, plant and animal life which together create their ‘ecological character’.

Ramsar wetlands
There are 16 wetlands in the Murray-Darling Basin that are listed under the ‘Ramsar Convention’, a multilateral treaty signed by Australia in 1975 that aims to protect internationally significant wetlands.

The Convention imposes certain obligations on member States, such as promoting the ‘wise use’ and maintaining the ‘ecological character’ of wetlands. These obligations mean that states need to ensure an appropriate quantity of water is available to protect the ongoing health of these vital ecosystems. 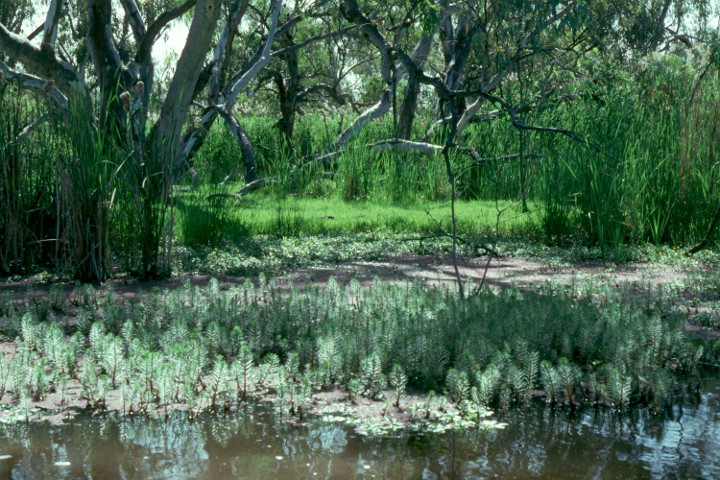 Under the Plan, water consumption across the Basin must be decreased by 2,750 gigalitres per year (GL/year) from 2019. However, the Plan allows this figure to be reduced if Basin states deliver water-saving infrastructure projects or change water delivery rules.

The idea is that these projects and rule changes will allow the same environmental outcomes (as under the 2,750 GL/year scenario) to be achieved with less water. Any water ‘saved’ through these concessions would then be diverted for agriculture.

This is a controversial idea. Some conservation groups and scientists question whether you can truly achieve the same environmental outcomes with less water.

At this stage, it looks like these projects and rule changes will allow the reduction figure to be rounded down to around 2,200 GL/year.

Will the Basin Plan protect Ramsar wetlands?
When the Basin Plan was being developed, extensive modelling was undertaken to work out how much water was needed to restore severely degraded rivers, aquifers and wetlands and ensure that they could remain viable into the future.

Modelling was undertaken for ten Ramsar wetlands, so quite a lot is known about how much water these wetlands need to survive, and when water needs to be delivered to maintain their health.

Unfortunately, the modelling showed that if consumptive use is reduced by 2,750 GL/year, eight of the ten Ramsar wetlands will still experience significant declines in ecosystem health, while results for the remaining two are inconclusive.

It is unclear what would happen to these wetlands under a 2,200 GL/year scenario, but the outcome is unlikely to be positive.

What about climate change and wetlands?
Scientists predict that climate change will result in less rainfall across the Basin, which will in turn exacerbate historical damage to wetlands.

The Basin Plan is based on historical climate data: it does not take into account future climate change. This means that the Plan has been designed using information that is becoming progressively outdated.

This is not good news for Ramsar wetlands. To be most effective, a long-term environmental management plan such as the Murray-Darling Basin Plan should take into account likely future climate conditions, not just past climate records.

Is Australia breaching its international obligations?
The application of international law in Australia is a complex area, so the answer to this question is not black and white.

However, it is possible that failing to provide an adequate supply of water to internationally-listed wetlands in the Murray-Darling Basin could violate Australia’s obligations under the Convention.

Though it is not widely known, the obligations under the Convention extend to properly accounting for climate change and its impact on listed wetlands. It is possible that failing to properly plan for future climate variability could also amount to a breach of international law.

What’s the solution?
To start with, the current Basin Plan must be implemented in full. Once this has been achieved, we can then consider how the Plan can be improved to deliver better environmental outcomes.

The law currently requires the Plan to be reviewed every ten years, with the next review scheduled for 2022 (assuming the law doesn’t change).

This technically means that there is scope to return more water to the environment at a later date – as long as the political will exists to do so.

In the meantime, it’s imperative that climate modelling be undertaken to determine how future changes in rainfall will affect not only wetlands, but the entire Basin, including Basin communities.

The information from this modelling – together with the results of scientific monitoring of the Basin’s health (which some scientists believe must be radically increased) – should be used to improve the Plan when it is next up for review.

In the meantime, the question remains: can these wetlands survive another drought?