A visit to our PNG partners

Papua New Guinea is, by a number of measures, one of the most significant countries in the South Pacific. For this reason, since its inception our International Program has had a strong focus there. David Morris, CEO of EDO NSW, made his first visit to PNG last week – in the wake of the APEC summit.

29 November 2018: It was an eventful week. As PNG’s police and security forces were plotting to storm Parliament House to demand unpaid APEC per diems, our team (including BJ Kim, Director of our International Program) and partners were hard at work. The Centre for Environmental Law and Community Rights (CELCOR) held its 2018 AGM and Mr Tim Chapman, EDO NSW’s nominee, was appointed to the CELCOR board. This is a significant milestone for both organisations and recognises the regional and international significance of CELCOR’s work. 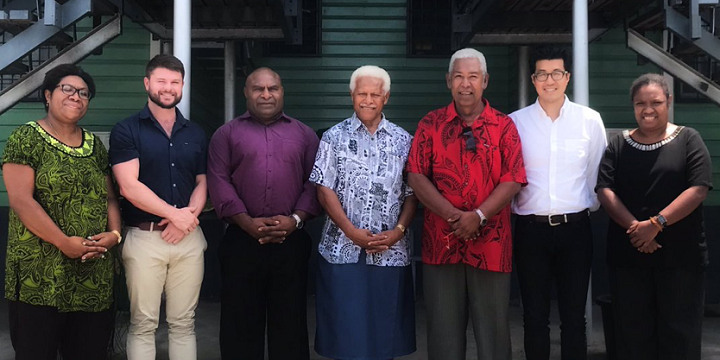 The EDO NSW and CELCOR team with community leaders, including Sir Arnold Amet, former Chief Judge of the Supreme Court of PNG (centre).

CELCOR also launched its anti-coal campaign. Mayur Resources Limited, run by Australian interests who appear to have co-opted footballer Darren Lockyer, are proposing to build PNG’s first ever coal mine. CELCOR and its partners are campaigning to oppose this development and the campaign launch received widespread media attention in PNG (eg. see last letter on this page).

The EDO NSW team also met with community leaders to discuss their concerns around Solwara 1, the world’s first deep seabed mining project. EDO NSW is supporting CELCOR to represent community members in accessing project and government documents relating to Solwara 1. In what would otherwise appear to be a straightforward freedom of information case, the PNG government surprisingly sought to dismiss these proceedings. A judgement on the dismissal hearing is currently pending.