Sea Shepherd Australia has today released rare whaling footage filmed on a 2008 Australian Customs mission to the Antarctic and obtained by EDO NSW under Commonwealth Freedom of Information laws.

In 2015, EDO NSW received instructions from Sea Shepherd Australia to help them obtain information from the Commonwealth Government relating to illegal whaling practices by Japanese vessels in the Southern Ocean. The resulting application for government information was refused by the Department of Immigration and Border Protection, requiring EDO NSW to press our client’s case with the Commonwealth Information Commissioner.

In May 2017, the Information Commissioner ordered the release of the documents sought by EDO NSW’s client. Without the work of the EDO, it is likely this footage would never have been uncovered. EDO NSW’s legal expertise allowed Sea Shepherd to negotiate the complex and often frustrating processes which attend the making of applications for government information.

EDO NSW CEO David Morris said, “Despite government attempts to refuse our client access to this footage, EDO NSW successfully prosecuted the case for access, allowing Sea Shepherd to obtain this horrific footage taken by officers on board the Department of Immigration and Border Protection patrol vessel Oceanic Viking, which shows Japanese whalers operating in the Southern Ocean.”

Whaling is a controversial issue both in Australia and Internationally. In 2010, the Australian Government brought proceedings in the International Court of Justice (ICJ) challenging the lawfulness of Japan’s scientific whaling program. In 2015, the ICJ ruled that Japan’s scientific whaling program was illegal and in breach of international law. Transparency about what the Australian Government knows and what it is doing to prevent further unlawful whaling in Australian waters is a matter of clear public interest.

David Morris noted, “This is footage Australians have the right to see, but initially the government didn’t see it that way and an appeal to the Information Commissioner was required. Public access to government information is a critically important part of our democratic society. These types of cases emphasise the importance of organisations like EDO NSW which have the expertise to assist individuals and community groups to challenge the barriers often put up to prevent access to government information.” 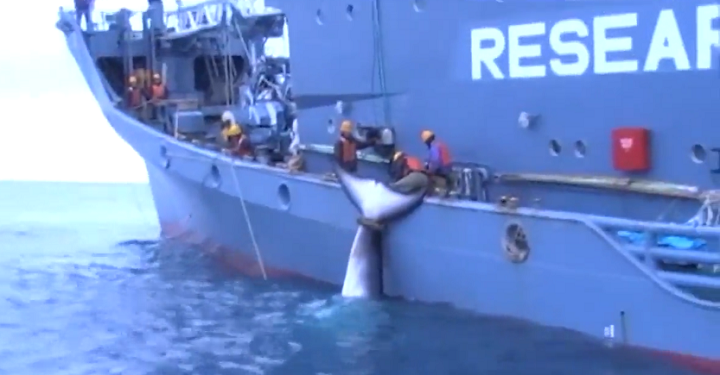 A still from the footage.