What is rotten in the Murray-Darling Basin? EDO NSW

Toxic: what is rotten in the Murray-Darling Basin?

The devastating scene of thousands of dead fish in one of Australia’s most important river systems highlights a failure of governance and policy, Quentin Grafton, Emma Carmody (of EDO NSW), Matthew Colloff and John Williams write.

11 January 2019: Anyone who has seen the video of rotting fish along a 20-kilometre reach of the Darling River near Menindee Lakes in New South Wales must wonder how we got to this point. We witness grown men crying over dead Murray Cod – one of Australia’s iconic freshwater fish species – killed by insufficient oxygen in the water. 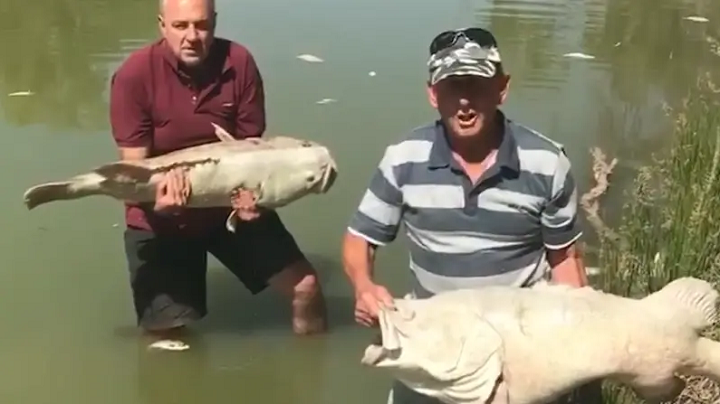 Yet our ‘leaders’ run away from what is really happening, and write media statements that fail to answer the real questions. Meanwhile, the Chief Executive of the Murray-Darling Basin Authority (MDBA), that oversees the Basin Plan and who is supposed to manage that river system, plays the ‘blame game’.

Sadly, it’s like 1991 again when the Darling River suffered from an algal bloom so devastating it prompted governments to rethink water management. That led to the National Water Initiative and, eventually, the 2012 Basin Plan. It was a plan that was supposed to ‘fix the Basin’.

This devastating fish kill is yet another ‘wake up’ call to our leaders: blue-green algae outbreaks, dead fish and dying rivers are not simply caused by the drought as is claimed by the NSW Irrigators Council. They are happening because we are extracting too much water from our rivers; failing to set limits on extraction that take into account climate change; allowing environmental water to be legally pumped; failing to introduce sufficient measures to protect water quality; and emptying the Menindee Lakes more frequently than is ecologically safe.

Add a prolonged period without rainfall to the equation, and it’s a time bomb waiting to happen.

This current tragedy was predicted and is no surprise. The river is like a piggy bank, if you keep taking money out without saving for the future you end up bankrupt – and just when you need it the most. At this time of drought, good water management ensures the resilience of rivers’ aquatic ecosystems. Clearly, this has not happened along the Darling River.

Some 1,200 billion litres of water were extracted for irrigation in 2014-15 in the Northern Basin (according to the latest data available) yet only a tiny fraction, or about 35 billion litres, actually arrived at Bourke from upstream in the past year.

This is about a failure of water reform, and a dereliction of duty – the drought is simply the straw that broke the camel’s back.

This is about how governments have failed to govern and to protect the common good of the people they were elected to serve.

The Murray-Darling Basin Royal Commission, established in South Australia to investigate the operations and effectiveness of the Basin Plan, will report next month. But its Senior Counsel, Richard Beasley SC, has already concluded: “The implementation of the Basin Plan has been marred by maladministration. By that I mean mismanagement by those in charge of the task in the Basin Authority, its executives and its board, and the consequent mismanagement of huge amounts of public funds.”

The legal regime in New South Wales has failed the Darling, Lower Darling, and Menindee Lakes on all three counts. Under the state’s laws, relevant water quality provisions are largely non-binding and poorly implemented while embargos on the pumping of environmental water may only be imposed at the discretion of the Minister (which rarely occurs).

The immediate trigger for the fish kill was inadequate stream flows, which caused surface water to stop mixing with the cooler bottom layer. Water heated up rapidly to over 30 degrees and then lost its oxygen – the warmer the water, the less dissolved oxygen that fish need to survive.

The fish kill featured in the video that has gone viral around the world is not even the first in the last month. Before Christmas, another devastating event wiped out some 10,000 fish. Yet, if there had been regular, carefully co-ordinated water-quality assessment it would have shown the sequence of events that led to this catastrophe.

And this has happened before. Ecologists who investigated the 2004 fish kill on the Lower Darling River recommended improved water quality monitoring and adequate storage at Menindee Lakes for downstream releases so as to improve water quality. Yet the agencies responsible failed to act on this advice.

What makes the tragedy even worse is that Menindee Lakes is believed to be an important spawning area for Murray cod and golden perch. As the fish from the latest kill decay, the substances they release will contribute to poor water quality downstream, storing up ecological problems for the future.

Those in charge of water management in the Basin were told what would happen as far back as 2010, and that the problem would get worse unless less water was extracted from rivers. They were also told what they should do to stop it from happening.

As certain parts of the Basin Plan come into force, jurisdiction over some of the causes identified above will shift to the Commonwealth. However, without some changes, it won’t get better.

So what is the solution? For a start, the Water Act 2007 should be amended to improve governance arrangements and reduce the possibility of conflicts of interest undermining the lawful management of Basin water resources.

Next, the Basin Plan should also be amended to increase recovery of water for the environment, augment actual stream flows, and buffer against the impacts of climate change. Full accounting of where water goes in the Basin, including return flows from farmers’ fields, must occur, while controversial changes to the management of the Menindee Lakes need to be reconsidered and any water infrastructure projects that are claimed to deliver the equivalent of increased stream flows should be subject to rigorous cost-benefit analysis to ensure they deliver a net positive public benefit.

‘Water resource plans’ for each catchment, which come into force within the next year or so, must also include rules to maintain sufficient flows and water quality, and to protect environmental water from legal pumping.

The Oxford University Dictionary named ‘toxic’ as the 2018 word of the year. Its choice reflects our times and describes both our deteriorating state of the Basin and the failures of those who we elect and appoint to positions of authority.

Yet these decision-makers carry on as if all is going according to plan. How toxic is that?

This piece was first published at Policy Forum, Asia and the Pacific’s platform for public policy analysis and opinion. Read the original here: https://www.policyforum.net/toxic-what-is-rotten-in-the-murray-darling-basin/