Do we really want to take more water away from two of our iconic, internationally significant wetlands? 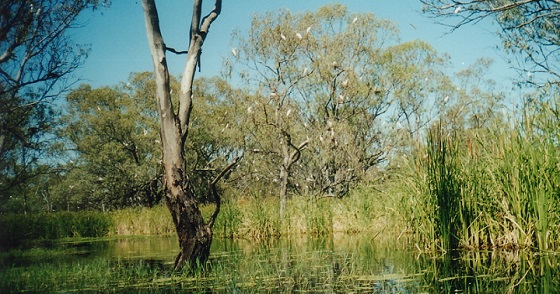 There are 16 wetlands in the Murray-Darling Basin listed under the Ramsar Convention, a multilateral treaty signed by Australia in 1975 that aims to protect internationally significant wetlands.

The Convention imposes certain obligations on member States, such as promoting the ‘wise use’ and maintaining the ‘ecological character’ of wetlands. These obligations mean that states need to ensure an appropriate quantity of water is available to protect the ongoing health of these vital ecosystems.

The Water Act 2007 and Basin Plan are the primary means by which the Australian Government seeks to discharge its obligations under the Convention. However, a recent proposal to take more water away from two fragile wetlands in the Northern Murray-Darling Basin is raising alarm bells.

The Northern Basin Review was a review of water recovery figures legislated under the current version of the Basin Plan. The idea was to undertake further scientific and socio-economic analysis to determine if new evidence justified varying the volume of water being returned to the river system in the Northern Murray-Darling Basin.

The Macquarie Marshes has too much water?

The idea that the ailing Macquarie Marshes are ‘over-recovered’ (that is, too much water has been recovered for their needs) is particularly perplexing. In 2009, the Australian Government lodged what is known as an Article 3.2 notice with the Ramsar Secretariat indicating that the Marshes were likely to experience a change in ecological character. In this notice, the Government stated that the solution was to ‘acquire water entitlements from willing sellers that represent value for money, and use the water allocated to them for the environment.’

It is difficult to reconcile the proposal to reduce the amount of water available to these wetlands with the admission that they need more water to maintain their ecological character. These concerns are shared by many landholders who own properties that form part of the Macquarie Marshes, with the Macquarie Marshes Environmental Landholders Association strongly opposing the proposed 70GL reduction in environmental flows.

Where to from here?

An amendment to the Basin Plan to remove 70GL from the pool of environmental water – including from the Gwydir and Macquarie catchments - has been tabled in the Australian Parliament. A disallowance motion has been lodged by Senator Sarah Hanson-Young and will be voted on shortly. EDO NSW argued during the formal consultation process that the amendment should not go ahead, in part because of the aforementioned impacts on wetlands, but also because it may not comply with certain key requirements in the Water Act 2007.

For more information, see our submission.